“Education can be dangerous. It is very difficult to make it not dangerous. In fact it is almost impossible" – Robert M Hutchins
I am sure when this quote was created it never meant what we witnessed on December 16 in Peshawar, yet it says it all.
As an Indian, ever since I understood political maps, geography and history of India there were stories, narratives, news and many facts and figures that made me not like my neighboring country. Like any other Indian, my patriotism always made me dislike Pakistan. I never believed in any of the peace treaties or the initiatives. According to me this relationship was beyond repairs! It always created a bitter taste in mind whenever it was mentioned. I even prayed that what we witnessed on November 26 in Mumbai, they should also witness something similar.
On December 16, 2014 it was not long when media started covering an Army School in Peshawar. Yes, it was Pakistan! Yes, it was a terrorist attack! But as I read the details I could not feel anything good about it. The school going children were targeted – of the soldiers who were guarding the country; putting themselves in line of fire to ensure their family’s safety as well. The teacher was burnt alive in front of the students – it was all so heart rendering that I took a moment to compose myself.
Then the messages started pouring in. Forwards, self written – Everyone was feeling the same grief I was struggling with. It was no longer the country we hated all our lives. I and everyone I knew connected with them at the humanitarian level.
As a mother I connected somewhere deep with each and every grieving mother – I could feel her pain or may be I can never, her pain is too deep for me to feel, just a glimpse of it made me shiver. I am scared to know how she is trying to cope up. She wakes up early, packs the tiffin, irons the uniform and helps her child to look crisp – hugs and sends to school with dreams of him or her becoming a better person. A place she thinks is safe and will shape her child in a way which she herself cannot.
But now she sits and blankly looks at the coffin somewhere hoping that it does not have what everyone says. She looks at the clock and then the door hoping for the silhouette of her child to appear and call out for her with a smile.
I pray for every mother, I pray for every father, I pray for every brother and sister - their loss is huge and I can never find words to express this loss. I pray to the almighty to give them strength to bear the pain.
These families will never be same. The smile has been robbed. I don’t want to know the reasons. I don’t want to know the actions that will be taken. I just want to know one thing – Does the world still think “Terrorism has a religion?” 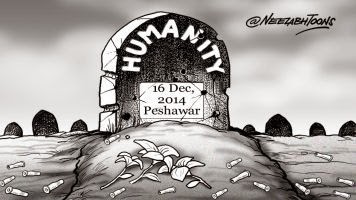 Blogadda Who are you reading today?